The objective of the day was to demonstrate the wonders of the Noch Electrostatics grass planting system. You know the idea, electrostatically charge some fine fibres of grass coloured material and shoot it onto a glued surface where the charge will keep it standing on end while the glue dries. That nice Mr Noch provides both the clever device which generates and applies the charge, and the grass fibres. These come in a variety of garish shades but by judicious mixing it is possible to achieve a realistic colour for your chosen season. The secret seem to be not too much green but plenty of yellow and brown. To work it appears you need the target to be electrically earthed to the charge producing gun, requiring either a conductive target layer, like aluminium foil with a base fibre mat glued on top and/or a good soaking with electrically conductive glue sold for the job (looked and smelt like PVA, with added salt perhaps?). Wire the gun to the foil/glue layer, shake away and lo and behold things got hairy.

This exersize was duly performed on a section of Don's Central Cheshire line Alpraham Sidings which we have all been enjoying so much in MRJ recently, and as in the MRJ, John Sherratt provided photos of the event. I regret that on this occasions the photos did not do justice to the results so instead I leave you with a shot of the much to be envied general environment of the Central Cheshire line, mostly obscured by an, always to be preferred, back view of a fair percentage of the group. 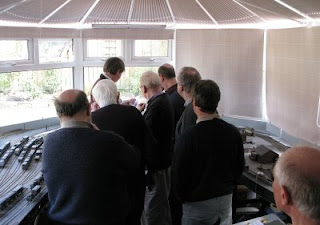 April 27th also saw a layout meeting hosted by Dick Petter. This was held to ensure we are getting on with the tasks we must complete before Knutsford East reappears at Scale Forum in September. Signalling was much to the fore. Our current signal operating mechanisms have not worked as well as we would have liked, sometime not at all, and Phil Bourne had a new generation of mechanism on display. Another signalling job required is the completion of the point rodding. The design of the rodding runs has been done by our own in-house professional signalling engineer Tony Walker, in pursuance of the S4 ethos of getting it all right. To complete this design there is, among other things, the small mater of the construction of large numbers of point rodding stools. We all now have our quoter, even if, like me, you managed to forget to go to the meeting!

Also on view were bits of two new Loco's. That is a D9 and an J10 (both LNER/ ex GCR) suitable for Cheshire Lines use.

I leave you with further pictures, again courtesy of John, one of Phil's magnificent new mechanism and another of the chassis of the D9 (an 4-4-0 for those not up to speed on LNER class numbers). This comes from Dick's hands and as always exhibits engineering values most of us can only dream about.