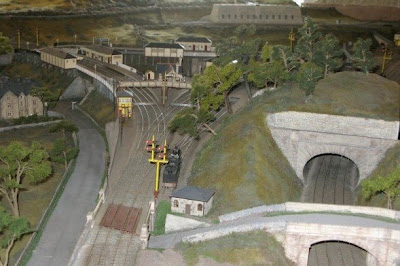 Our April meeting was once again at Tony Montgomery’s house. This time we met to have a play with Tony’s latest purchase. He has brought Ambergate.

Ambergate way originally built by John Webb with help from his friends in the and Warwick MRS. It had passed through another set of hands before Tony snapped it up off Ebay. For those wanting more background to the layout there are still details to be found on the Leamington and Warwick MRS website. The picture above was taken at our meeting with most, but not all, of the layout occupying most, but not all, of Tony’s living room. Denise is so understanding.

Many of you will remember Ambergate which was once a regular on the exhibition circuit. The more knowledgeable among you will now be saying, but that was EM not P4. And your would have been right a few weeks ago, but not any more. Since making the purchase Tony has been busy converting most of the visible area track work from EM to P4. Some of us did wonder how he would get on with this. As the track is soldered up on riveted ply sleeper, the plain track was never going to be to much of a problem. The question was, how would he get on with the point work!

To test it out a number of members brought along various P4 Locos and stock, all of which trundled back and forth over almost all of the track work available with little apparent difficulty. This includes the four double junctions on the 15′ x 20′ part of the layout erected. There is in fact a fifth double junction on the complete layout, but Tony was apparently disinclined to indulge in the demolition necessary to get that baseboard attached to the rest of the layout in his living room. Denise is only so understanding. In the event, in terms of track holding this was a triumph.

There are other issues however which may account for the layouts reputation for periods of inactivity while the operating crew looked puzzled. The key feature of Ambergate is that this was a triangular station, a feature fully reproduced by the model. So the layout is one giant double track reversing loop, with complications. The solution to the electrical polarity issues that arise from this track layout is remarkably cleaver, but logically opaque. We spent a happy afternoon sorting out a variety of “what happens if” scenarios when the points, electrical section and polarity controls were all operated together. We now understand exactly why previous generations of operators may have looked puzzled, but in the end we could get locos to go where we wanted and to travel in the right direction, expect for the loco which was wired up the wrong way round.

Tony has had a long term aspirations to model Buxton station. He now intends to combine this with much of Ambergate, which is prototypically logical. The whole thing is intended to occupy a palatial railway room to be built in one corner of their garden. He also plans to go DCC which may simplify the electronics a bit but will still pose some interesting electrical conundrums. We await future progress with interest. 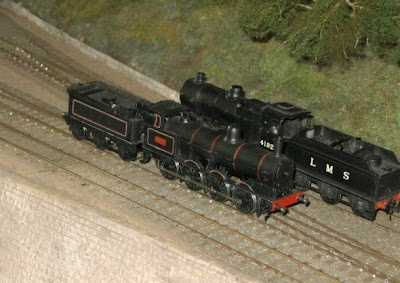 Pictures as always by John Sherratt, the second one shows a 4F and a Class C 0-8-0 proving it all works.