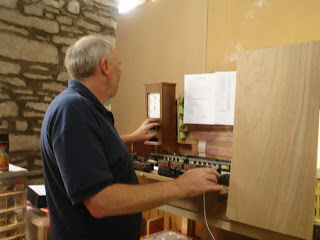 From being a gleam in Stephen Paulin's eye, the Cumbria Area Group (yet another CAG!) seems to have developed wings, and looks to have a secure future. The second meeting on 7th June was better attended than the first, with a total of seven attendees. After lunch at the Crown Inn, we repaired to Ian Everett's house to play trains. This was supposed to be a serious operating session but it must be admitted that it was more like train ping-pong. The object of the operator of the fiddle yard at each end of Clecklewyke's scenic section seemed to be to fill his opponent's yard with trains, whilst obeying full block regulations, using correct bell codes and running his trains at scale speeds. Two photographs show Phil Tuer and Sephen Paulin 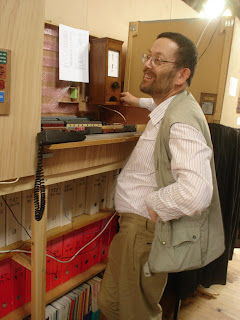 at the controls - it would appear from Stephen's expression that he is winning?
Ian's wife Betsy produced some excellent scones for tea, some of which were eaten by the Area Group members, although the majority had been scoffed by Ian and Betsy's border terrier.
A third picture shows more details of Clecklewyke, which will be exhibited with Area Group members' help at Halifax on 27/8 September and at Workington on 22/3 November - two alternatives to Scaleforum and Warley if our northern friends find those too far. 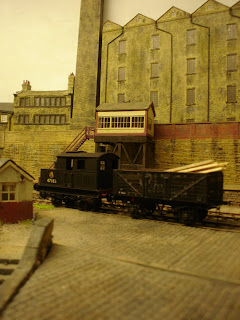 The next meeting of the Area Group will be at Stephen Paulin's house on Saturday 2nd August, where there will be a demonstration of split-chassis* loco building. More details from Stephen at s.paulin@merseymail.com
Posted by Danny Cockling at 3:41 pm No comments:

A Worth While Event...

The Naggers of Newport met on Weds 25 June, the evening was designed to be a show and tell evening. Instead it turned out to be one of the more memorable modeling evenings, as ideas on chassis construction were floated. Steffan Lewis gave a fabulous talk on how he constructed his chassis, including some great tips on dealing with eronious wheels, hopefully an article will appear on the NAGNAG website in due course.
Bernie Baker brought along some RTR conversions that hes' been working on and some wagons...just one or two...the conversions ran smoothly, some of the wagons less so. But isn't that the point, to find out what works.
Robert Foot brought along some really nice buildings that he'd scratched for his home layout, just wished I'd taken a photo!
The rest of the Naggers sat round and pulled Bachmann mk1's to pieces, with a view to repainting and springing the coach bogies, using Bill Bedford's sprung coach bogies.
An absolutely cracking evening, lots learned, as well as done. Thanks to everyone for entering into the spirit of things.
Next meeting 30 July.

Mike Garwood
Posted by Anonymous at 9:33 pm No comments:

On the 15th May we held a run and natter meeting, which was well attended by some 13 members, including a visitor brought down from Segbergh Cumbria by Alan Fell. Our visitor was Henry Wilson, an antiquarian, secondhand and new book dealer with focus on transport and industrial history, recently moved to the area. He proved to be a popular contact by several members, trying to track down some of those elusive research articles.
Also visiting for a run on the same day was Ian Everett's Austin Seven, which had unfortunately suffered a rather nasty rough shunt on the way to Preston. The next meeting is Thursday 19th June, please contact Mike Norris (details on blue sheet), if you require more information and the meeting is a run and natter session, please bring something of interest to run or discuss.
Posted by Mike Norris at 10:11 pm No comments: