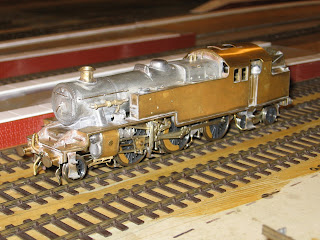 The 21st of February saw out planned 'Internet and Video' night replaced by a 'run and natter' session due to decorating works. The meeting was well attended by 9 members and one visitor (a local 3mm modeller and a regular operator of 'Preston' - Terry Tracey).

A variety of topics were discussed as usual and a number of visiting locos made an appearance, also on the night my Stanier 2-6-4T made its inaugural run (see picture), I will try to get more pictures of other visiting loco's for next months update.

The next meeting is Thursday 20th March, please contact Mike Norris (details on blue sheet), if you require more information.

Next months meeting is a talk by Terry Tracey on 'Allhallows' a Kent SR station and model, the date for that meeting is 17th April.
Posted by Mike Norris at 7:58 pm No comments: 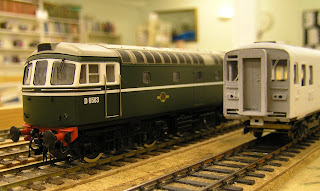 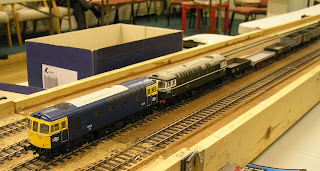 Meanwhile, David Mead, Brian Pearce (hidden), John Farmer and David Browne discuss work and progress on board design and construction for TT2, with copperclad timbering laid for one of the B7 crossovers in the foreground.

(One day I'll get the hang of formatting text around pictures in these - it never seems to go where I want!).
Posted by Rod Cameron at 9:42 am No comments:

Brought over from the UK by Iain Rice and former Society Chairman John Chambers, 'Hepton Wharf' represented the Scalefour Society at the 'Rail 2008' Exhibition in Houten in The Netherlands this weekend (7th-9th March); with assistance or hinderance by members of SNAG the Netherlands Area Group. You can see meore pictures on the SNAG webpages.
Posted by Danny Cockling at 4:41 pm No comments: