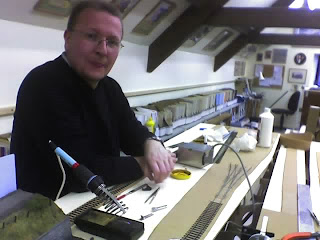 Yes the new Brinkley boards now have some track and just to prove it here is a photo of one of the PW gang with board 4.

In view is Graham's 3 way turnout plus a length of flexitrack to the turntable.Further progress now includes track on the main line and the shed access road including the crossover.

Morgan has also done a sterling job on the new shed roads and associated inspection/pits - any chance of a photo Morgan?


Wishing you all a Happy New Year,
Posted by Danny Cockling at 11:26 pm No comments:

On Thursday 20th November, we had a 'Run and Natter' meeting attended by 10 members. Although a lot was discussed, including the program for next year, which will be printed and available at our next meeting, nothing much was running!

On Saturday the 15th November the layout was visited by the East of Scotland 4mm Group, 8 members attending, most of whom had travelled down for Edinburgh for the day, including Jim Summers - the former editor of the Scalefour News who was instrumental in getting me to put pen to paper to write about the layout in edition no. 154. Also among the visitors was a former Flyde group member Bob Hetherington. After 4 hours of operating Preston, it seemed all had enjoyed themselves, I will be looking towards arranging a reciprocal visit at some point in the new year, thank you to David Orr for the invitation. Also thanks to my mentors David and Anthony who help newbies get to grips with the operation of the layout.

The next meeting is Thursday 11th December, (NOTE not the third Thursday), please contact Mike Norris (details on blue sheet), should you require more information and this meeting is a talk by Anthony Miller 'LNER Good Traffic', followed by a hotpot supper.
Posted by Mike Norris at 7:10 pm No comments: