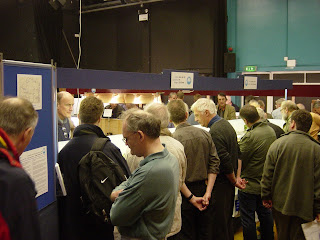 Three members of SLAG motored up the M1 to Wakefield with their layout St Merryn carefully (and tightly!) packed around them, for the annual celebration of P4 modelling that is Scalefour North. A largely hassle-free journey set the tone for the weekend; and after a calm setting-up operation on the Friday evening we looked forward to a weekend of driving trains and informed chat.

On the Saturday we were joined by two other members of SLAG, and by Brian Pearce who had been recruited some months ago (and undergone his driver training) to augment the team when playing away from home. Layout (and operators) performed well over the weekend, though one member was heard to admit to being “bruised” after 30 minutes of operating, acknowledging that driver training and practice was a necessity rather than a luxury!

Some very nice comments about the layout were received, and it seems that visitors largely enjoyed what they saw. For our part, we left with a list of twenty or so “things to address” before taking the layout on the road again, but all of them are comfortingly minor.

The social side of the weekend was a great success, as is normal for Scalefour North. Thanks to all the Team for a great weekend.
Posted by Danny Cockling at 2:31 pm