No typo with the heading - we're all in a daze after lots of activity last month.

In order to further progress the extensions to Burntisland 1883, we hired our normal location (village hall, Dechmont) through local resident Richard Darby. And there for 9 days the layout remained erected for anyone interested to come along and make advances to it. And many did.

Contributors to the extensions - so far - have been based not only in areas that can be described as the East of Scotland but going outwardly extends to Glasgow, the Borders, the Inner Hebridees, Cumbria, Shropshire, Berkshire, and Ceredigion (that's in Wales for the geographically challenged). Some from these far-flung outposts even made the trip up for the adventure in July. 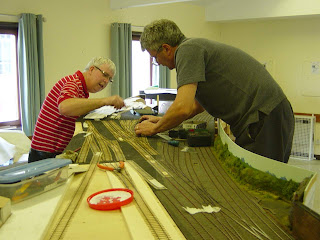 So making all parts of the jigsaw fit isn't as straightforward as would first be imagined. However the jigsaw is indeed coming together.

The major item to be accomplished during the week was the laying of approach track to the goods ferry. Using Templot, this was built as a single unit and getting this laid was key to other envisaged activities, at one end of the layout at least. With that complex piece of trackwork laid, track could then extend westwards and eastwards. T'was not all plain sailing as the pained expressions in the attached image testify.


Meanwhile, in other parts of the room, others were busy finalising track for the goods ferry, wiring up and mounting a host of tortoises and D clamps, a number of other wiring matters, chairing track, adding scenery, finalising building of boards, to mention but a few.

The present position with the layout is that virtually all boards are built just the passenger ferry pier to go, most of the track is laid, and the back is broken on the wiring front.

The layout looking from the east now looks like this :

Of course all these extra metres of sidings and track will look awfully empty without an additional wagon or 2. To this end we had a wagon building session some months ago run by Simon de Souza. Possibly inspired by that session, Ian Terrell has worn out many a Swann and Morton blade to produce some fine dumb buffered stock : 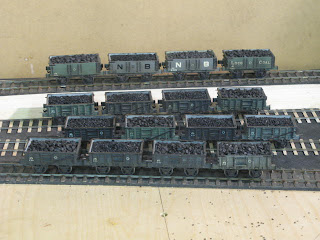 Still a long way to go, but lots of progress made to date. Next milestone will be getting engines running across all of the new track, and then on to scenics. However, that will all have to wait until after exhibiting at Hawick on the 23/24th of August, where a slightly extended version of the original layout will be on display.

Thanks to Jim Summers for most of the photos.

Posted by Lindsay Galloway at 3:24 am