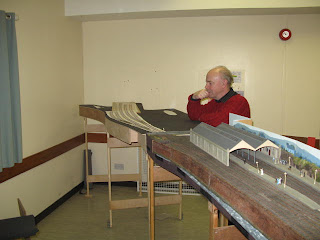 Recently, the whisper on P4_talk was that future extensions to Burntisland 1883 might be little more than a pipe dream. Oh, no, no, no, no.
Those industrious fellows in the Scotland East Area Group, having considered and poured over plans for the next 2 extensions for months…and months… have started turning all that planning and preliminary building into action.
Over the last weekend, the boards were erected for one of the extensions, underlay laid, and most of the track built for it.
Activity was at such a feverish pace that on day 2, Richard Darby returned from a romantic overnight stay in Glasgow with lady wife to remark that the heat in the hall was stifling. You’ll see from the accompanying photo that, not only had the layout lampposts started to wilt with the heat, Allan Goodwillie had also wilted into deep slumber despite that fire alarm ringing loudly in his right ear (apparently dreaming of having finished Burntisland's second station pilot. Now, that was a pipe dream).
Posted by Lindsay Galloway at 7:25 pm