The 8th of March saw the members of the Crewe Area group assembling for our monthly meeting in the very appropriate surroundings surrounding member Dick Petter's magnificent layout. Dick has a most enviable layout room in the properly converted loft of his house giving "all the comforts of home" standards of accommodation in which to enjoy his hobby. The layout takes up a good proportion of the space, so the meeting was conducted in the areas which remain. No lounging in arm chairs on this occasion. Joining us for the day was editor John who had taken time off from his Snoozitorial duties to pay us a visit.

Those who've met the group layout, Knutsford East, at exhibitions may remember that it represents the junction of a proposed but never built branch from the LNWR Crewe to Manchester line to the Cheshire Lines Chester to Manchester line at Knutsford. Dick's home layout represents the other end of this branch where it leaves the main line at Chelford. The plan was that once the P4 Challenge was over and that flush of exhibition invites has died down, Knutsford will takes its place in Dick's loft attached to Chelford. Knowing Dick I'm sure there is a way of doing this but I can't say it particularly obvious how it would all fit in!

Chelford is already well developed but, I'm sure Dick would say, as yet incomplete. Progress has been rather stalled by the need to get Knutsford up to standard and keep it that way. Now that we appear to have a year off from the exhibition circuit, it seem that there are some new green shoots of development in the form of the production of a very workman like set of signals. There is also much evidence of a heroic LMS stock building program. The layout features a two track main line oval which allowed us to circulate a number of visiting loco's and other items of stock for their owners edification and delight.

Chelford is built into its room and is not intended to be displayed anywhere but at home, so the attached photos may be the only way you are likely to get a look at this very attractive layout. That is unless you decide that you are actually resident within striking distance of Crewe and you wish to join the group! Photos by John Sherratt as normal. 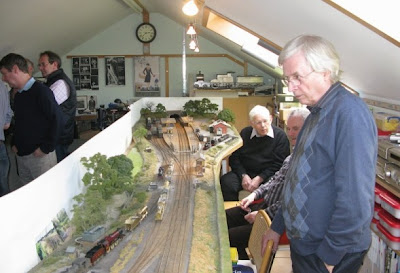 Editor John Surveys the seen, one suspects he is considering the possibility of a future Snooze article. 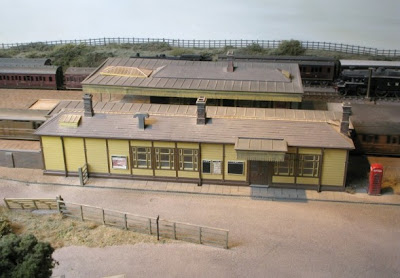 Chelford Station Buildings look most attractive. No sign of the cattle market though. 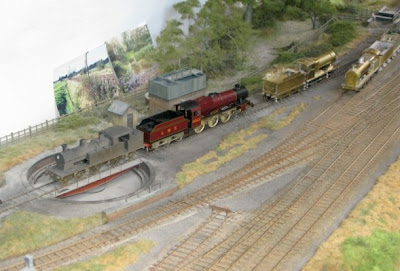 Just a small selection from that heroic stock building program. The C13 is an interloper which has presumably come up the branch to Knutsford which runs across in font of the turn table.
Posted by Will L at 6:40 pm