No let up in activities down here in Devon as we rapidly approach Christmas - a large number of us made our way to the Taunton show in mid-October, as you'd expect, and our regular meetings every fortnight have continued to attract a dozen or so members.


Two weeks ago, because some members had not yet seen it, John Farmer brought along the boards for Swaveney, the 1970s layout of the late Nigel Hunt that DRAG have taken into care with a view to restoration and possible return to the exhibition circuit. The layout represents a small terminus on the M&GN, and was possibly the first P4 layout exhibited that had been built by individuals - Nigel and Andy Rush mainly - rather than a group. We believe its last show was York in 1977. The trackwork and wiring are in reasonable condition, but the scenery is a bit tired-looking and some of the buildings are suffering a bit from age. 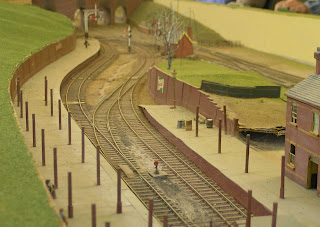 However, we need to avoid being distracted by this project until we have finished the Mk2 test track. So far much has been designed and many components have been purchased, but we are yet to actually build any of it. Hopefully this will have started before Christmas when we visit one of our members in East Allington near Kingsbridge, who has a wood workshop facility, to kick-start construction.


Meanwhile, on the social side, we are looking forward to our annual dinner at a pub near Totnes in mid-January.
Posted by Rod Cameron at 11:54 pm