An Area Group at work 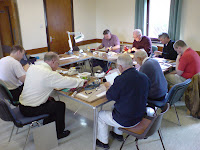 Here is a picture of the East Scotland Area Group taking part in a group tutorial on turnout building last Saturday. Jim Summers tells me that they emerged with eight sets of points plus some other trackwork by folks not in the picture. "Not a bad total and better than watching the football." Jim concluded.

Picture by Simon Wall.
Posted by Danny Cockling at 5:35 pm